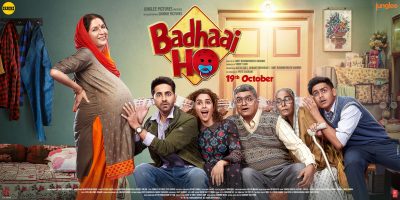 Badhaai Ho Story: A middle-aged couple Priyamvada Kaushik (Neena Gupta) and Jeetender Kaushik (Gajraj Rao) get unexpectedly pregnant. The couple from a middle-class family starts feeling conscious about the pregnancy, as they become a talking point in their social circles.

Even their sons Nakul (Ayushmann Khurrana) and Gullar (Shardul Rana) grapple to cope with the situation that they are in, because they believe…Yeh bhi koi mummy papa ke karne ki cheez hai?

Middle-class families are often riddled with their own set of values and social systems. While pregnancy and motherhood are celebrated, subjects like sex and romance are talked about with a degree of embarrassment and awkwardness.

The concept of Badhaai Ho, where a quintessential Delhi couple; parents to two adult boys (one of them is of marriageable age), get pregnant out of the blue, is just the sort of subject that can ruffle-up feathers within the middle-class family system.

Yet, this dramedy, based on children feeling terribly embarrassed by the outcome of their parents’ mid-age romance; with outsiders joining in the criticism, conveys some really progressive thoughts.

The situational humor of ‘Badhaai Ho’ is complimented perfectly, by striking performances from Gajraj Rao, Neena Gupta and Ayushmann Khurrana. This film is as funny as it is liberal. The conversation around the fact that romance and passion have nothing to do with age, make this film a stand out for many reasons. 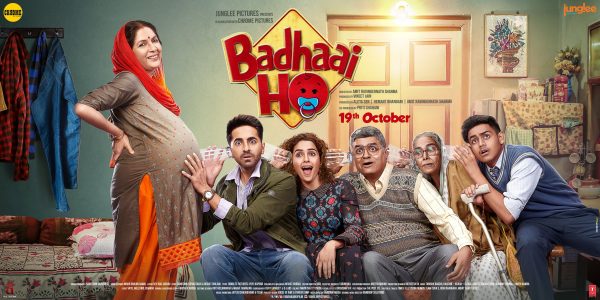 The Kaushiks live in Delhi’s Lodhi colony, a run-of-the-mill setting, where family affairs can tumble into the next home through adjoining balconies and windows. So, when Jeetender and his wife Priyamvada find out about their unexpected pregnancy, the news spreads like wildfire.

Neighbors get curious, but the knee-jerk reactions come from members of the Kaushik household. The two sons are shocked by the fact that their parents still have an active love life (read: sex life), while the grand mom (Surekha Sikri) is appalled by the news, too. Steering clear of clichés and stereotypes, the writing of Shantanu Srivastava and Akshat Ghildial brings in some genuinely likeable moments.

The way the parents break the news to their family is hilarious. Priyamvada’s colony friends feel happy for her, while her own children are almost left red-faced by the news. The on-screen romance between the parents, replete with 80s and 90s romantic songs playing in the background, is absolutely endearing. The well-crafted dialogues add to the hilarity of the situations.

You don’t expect actors playing ‘mom and dad’ to have as much screen space as the young leads of the film, but director Amit Ravindernath Sharma actually puts the spotlight on senior actors Gajraj Rao and Neena Gupta. Their romantic moments are the veritable highlight. Same goes for their performances, too.

Neena Gupta is excellent in her portrayal of the unsettled mother. Gajraj Rao’s performance is the best thing about ‘Badhaai Ho’. In fact, he steals every scene that he’s a part of. Just his body language, mannerisms and expressions are enough to make you laugh out loud. Not to be overshadowed, Ayushmann, too, is in top-form, playing the son who feels the brunt of the social pressure. So much so, that his relationship with his girlfriend, Reene (Sanya Malhotra) gets affected, too.

Surekha Sikri, who plays the dadi, deserves a special mention. She’s old-fashioned for various reasons, but when it comes to taking up for her bahu with a baby bump, she unabashedly tells the rest of the family that it’s admirable for couples to be in love and have “sexy” (meaning sex) at this age. Sanya Malhotra, who plays the girl with modern outlook, breezes through her role.

Badhaai Ho, much like its subject, puts a fantastic new spin on the usual. In a new-age rom-com, you’d expect Ayushmann and Sanya’s love story to take centre stage, but when you see the middle-aged parents blush with romance, the entertainment really becomes novel. The music by Tanishk Bagchi, Rochak Kohli and JAM8 is top-grade, too.

Tracks like Badhaiyaan Tenu, Naina Na Jodeen and Sajan Bade Senti fit the mood perfectly. The film engages thoroughly, while still making a social statement. Even though the story has a limited scope, the detailed writing, the finesse of Sharma’s direction and some unforgettable performances, make this film an absol