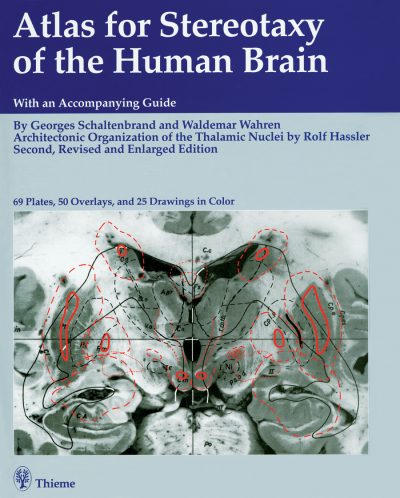 Editors and Authors: Georges Schaltenbrand, and Waldemar Wahren, with the cooperation of L.V. Amador and I.A. Blundell
Publisher: Thieme – 84 pages (with 69 plates, 50 film overlays and 25 drawings in color)
Book Review by: Nano Khilnani

This extra large (14” wide x 16.5” long x 3” thick) four-ring binder containing drawings of many parts of the brain, is a unique asset for neurologists and neurosurgeons. In it, the authors – Drs. Schaltenbrand and Wahren – have utilized stereotaxy to present detailed images. Stereotaxy is a precise method of identifying non-visualized anatomic structures by the use of three-dimensional coordinates. It is frequently used for brain and spinal surgery.

A small booklet of 26 pages comes with this ring binder and functions as a useful guide, including providing a list of topics covered in this valuable binder with the very large plates. On the Contents page of this booklet you will find the following as an overview:

In order to prepare the material for this second edition of the book, the editors and authors collected 111 brains of people ranging in age from the neonate to 86 years old. They collected them at the University of Wurzburg in Germany, the University of Lund and the Soderdjukhuset in Stockholdm, Sweden.

They kept records of each person to whom the brain belonged, including, age, cause of death, sex, skull measurements, type of skull, type of perfusion, and the amount of solution used.

The editors describe the method by which they prepared the brains for this study:

“The macroscopical sections were made by placing the brain into a specially constructed brass frame resting on a heavy glass plate. Slices of 5 millimeters in thickness were cut with a very long razor sharp autopsy knife so that the irregularities on the surface produced by the usual sawing motion were eliminated as far as possible. The brains which were collected were later with a macrotome which was adjustable so that the supporting plane could be tilted at any angle between 60 degrees and 90 degrees to the plane of the knife, allowing the sections to be cut in any desired plane.”

They then go on to explain the details on how they prepared the specimens from the coronal, sagittal, and horizontal sections. In addition, in order to avoid the possibility of shrinkage and distortion during photography (which had been observed using other methods using regular negatives and paper prints) they used glass negatives, and made measurements and tracings from the glass plates.

In order to ensure to facilitate the drawings and get correct measurements, the negatives were made in an exact one to one ratio. In order to maximize accuracy, they clarify their data collection methods by clarifying that “material that showed any pathologic process in the brain was not used in the compilation or measurement of the normal series.”

A few notes on the brains of the subjects used for this study and causes of death:

This is a unique atlas for neurologists and neurosurgeons, with detailed imaging using the stereotactic method, which enables unusual, highly valuable three-dimensional views.

With the cooperation of: L.V. Amador and I.A. Blundell 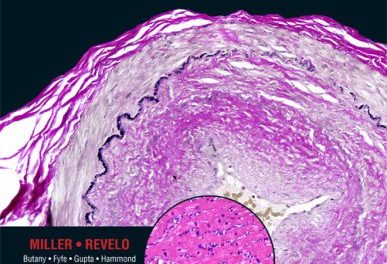 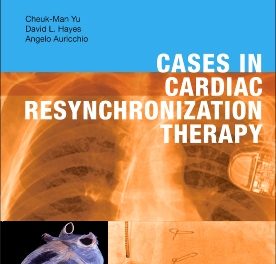