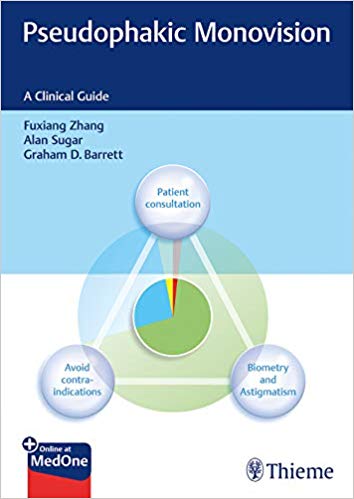 Monovision is the adjustment of one eye for near vision and the other for distance vision. Pseudophakic monovision is a type of monovision used in lens surgery (most are cataract surgeries) to correct postoperative presbyopia by programmed refractive error from biometry calculations.

Presbyopia is a condition associated with the aging of the eye that results in progressively worsening ability to focus clearly on close objects. Symptoms include difficulty reading small print, having to hold reading material farther away, headaches, and eyestrain. Different people will have different degrees of problems. Other types of refractive errors may exist at the same time as presbyopia.

An Intraocular lens (IOL) is a lens implanted in the eye as part of a treatment for cataracts or myopia. The most common type of IOL is the pseudophakic IOL. These are implanted during cataract surgery, after the cloudy eye’s natural lens (colloquially called a cataract) has been removed.

In his Foreword to this book Dr. David F. Chang writes:

He also points out that recent results from surveys by the American Society of Cataract and Refractive Surgery (ASCRS) suggest that this is a significantly more popular strategy than multifocal IOLs despite the premium fees associated with the latter. He also laments “it is striking how little print or podium education is devoted to pseudophakic monovision – particularly for cataract and refractive surgeons.”

Let us take a brief look at chapter 4 entitled Pseudophakic Monovision. In the Introduction to this chapter, the author sums up pseudophakic monovision this way:

“The concept of using one stone to kill two birds is at the core of using intraocular lens (IOL) monovision for the management of presbyopia for cataract patients The fundamental component of monovision is increasing the depth of focus while maintaining acceptable stereovision. Binocular depth of focus is associated with the sum of two monocular ranges of clear vision, spanning from the near focal point to the far focal point. It is reasonable to consider a certain amount of power difference between the two eyes in terms of the postoperative target when the surgeon chooses an IOL implant.”

This is a great book on a relatively rare eye condition, and in that respect is a pioneering effort that is quite valuable to those eye care professionals who have patients with this particular vision disorder.

Alan Sugar MD is Professor and Vice Chair in Ophthalmology and Visual Sciences at Kellogg Eye Center at the University of Michigan in Ann Arbor, Michigan.

Book Review: The Gifted One: The Journey Begins 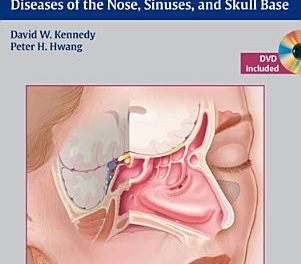 Book Review: Rhinology: Diseases of the Nose, Sinuses, and Skull Base, with DVD