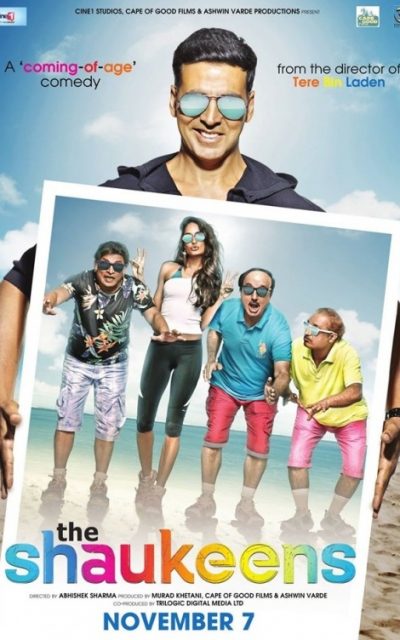 Fans of Bollywood superstar Akshay Kumar will have surely seen the newly released poster for ‘The Shaukeens’ this week. The film, out on November 7th is a remake of Basu Chatterjee’s 1982 comedy Shaukeen and is directed by Abhishek Sharma of Tere Bin Laden fame.

The feel-good adventure film follows three middle-aged men played by Annu Kapoor, Piyush Mishra and Anupam Kher, who venture on a trip to Bangkok, where they meet the sizzling hot Lisa Haydon. The posters are colourful, bright and beach-inspired with Lisa taking centre stage on one poster, while superstar Akshay fills the other poster, sporting aviators and a casual top.

Also arousing curiosity amongst film goers is the creative motion poster, in which we can hear voices and see visuals of three sets of dentures. The motion poster gives away very little and leaves fans guessing as to what to expect next.

One thing is for sure – fans can look forward to seeing a signature Akshay stunt, with sources reporting that this particular stunt was inspired by the cartoon duo Tom and Jerry. Akshay was inspired to do this stunt while watching ‘Tom and Jerry’ with his kids. A little creative thinking and some bravery and the stunt has become part of The Shaukeens.