Professional traders look at more than just movement of the averages to gather insight into the direction of markets. In particular, they look at the internals of a market, including the performance of individual sectors, to try and figure out the next likely direction for stocks.

As a general rule, the market is healthy (and rallies tend to be more-sustainable and -powerful) when growth-oriented sectors are the ones leading the way higher.

But when the market’s on the move upward and the “usual suspects” aren’t the ones leading the charge, that’s often an indicator of more declines ahead.

Typical growth-oriented sectors include basic materials, tech, small caps, commodities and industrials. When these types of sectors are leading the charge higher, it tells traders and investors that economic growth is accelerating, which makes a market rally more-powerful and -sustainable.

But when, say, a market is rallying but it’s being led by a sector such as utilities, consumer discretionary or telecom — which are all less-macroeconomic-sensitive sectors — that kind of divergence sends a warning signal to traders.

More ominous than this divergence, however, is when sectors that have led a rally for months begin to break down and follow the market lower. That can be a clear sign to traders that the market action might not be just a normal correction, but instead a market shift.

Unfortunately, that’s just what happened in the market last week.

Bankers, Builders Break Out … and Then Down

The best-performing sectors in the market year-to-date have been the financials and the homebuilders. Up until this recent correction, that leadership has really emboldened the bulls, because housing and the banks have been two sectors that have been a big drag on the market and the economy since the 2008 financial crisis.

So, seeing those two sectors outperform made investors and traders much more bullish on the economy and market. The reason is because the market has been held back by those industries, so seeing them outperform is like relieving a clog in the drain.

They’ve been impeding the market’s recovery for years, so with those sectors healing, it was taken as a positive for the economy and the entire market.

Last week, though, the financials and homebuilders broke down badly, and that is yet another piece of evidence that this market is losing momentum. Just take a look at the KBW Bank Index (BKX), which, here in the $44 area, is up only about 9 percent since the beginning of the year. 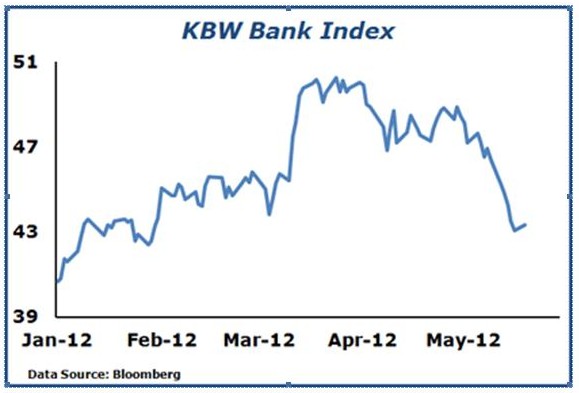 The crisis in Europe, as it enters a new stage, is once again weighing on the financials, as fears of banking runs and a breakup of the euro have investors worried about the ramifications. So, there is some justification to the decline in the financials.

Homebuilders, though, have been seeing fundamental improvements in their businesses, and recent data shows the recovery in housing is progressing, although it is very fragile and painfully slow.

But, the decline of the homebuilders shows investors are becoming more concerned about Europe negatively affecting the broader economy and the consumer, which is a big negative for the market. 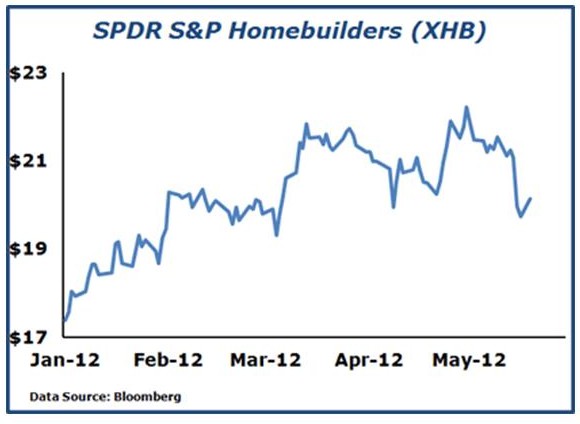 Is There Even More Downside Ahead?

There are many ways to play the decline in the broader markets. But as you look at ways to profit from a potential market decline, try to focus on companies and sectors that are very sensitive to the macroeconomic environment, versus large-cap industrial companies like those found in the Dow Industrials.

Instead, focus on economically sensitive small- and mid-cap companies. There are a number of inverse Exchange-Traded Funds that let you establish a short-side position in indexes that represent these smaller stocks as they’re falling out of favor.

Should the breakdown of the leading sectors like the homebuilders and financials be a harbinger of lower stock prices, the small caps will fall faster than the large caps. The good news there is that those “little” stocks can offer more hedging and profit potential.

Have a great Memorial Day, 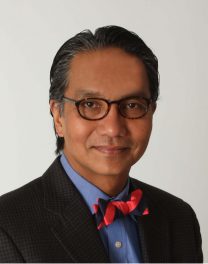 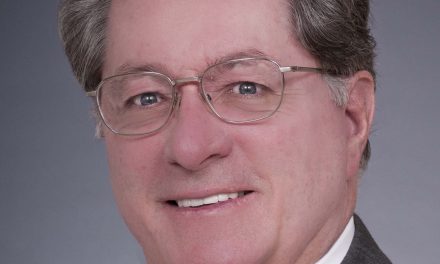