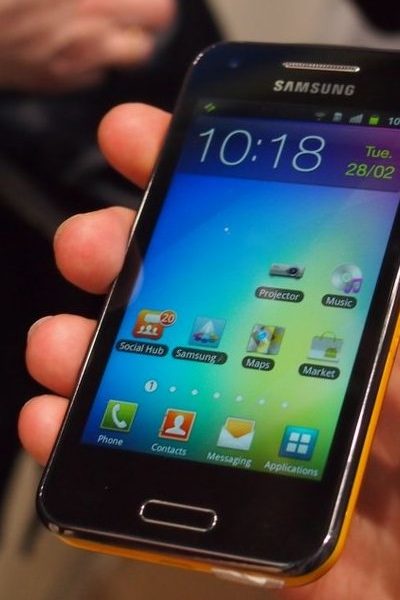 By Seth Barton at MWC in Barcelona, as shown on ExpertReviews.Co.UK

Samsung reputation is for well-priced, high-quality consumer products, not for wacky off-the-wall devices. So when we heard it had launched a phone with a built-in projector we wondered if the conservative company was a having a little wild fling, or whether this was something seriously brilliant. Having seen it in action we’re now convinced it’s the latter.

The Samsung Galaxy Beam at first glance looks like a lot of the company’s other smartphones. However it’s a little chunkier than most, though only by a couple of millimetres at 12.5mm, and a touch heavier at 145g. At the top end though is a bulge that incorporates a square lens, behind which is a tiny (or pico) projector.

It’s an LED-based system with a 640×360 resolution. LED projectors don’t suffer from limited bulb lives like traditional models, and this one’s 20,000 hour life should outlast the phone itself. The 2,000mAh battery inside is good for 3 hours of constant use, plenty for all but the longest feature films.

Now 15 lumens isn’t a huge amount, and in our tests of pico projectors we’ve found that you’ll need a pretty dark room to get a decent picture of any size. For most business uses therefore we think carrying a laptop is a better bet for ad-hoc presentations.

However, when built into a smartphone you carry with you everywhere, the laptop arguments doesn’t hold water. Instead you have a fun device for showing photos or movies for your entertainment, or others, pretty much wherever you go. we can see a huge appeal for this, epecially amongst people who like to stay out late and live on the go. 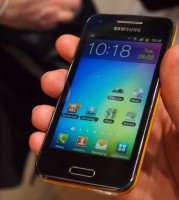 In portrait mode, the aspect ratio of the phone’s screen doesn’t match that of the projector, so you only get a smaller image. However, at least its orientated the same way as the touchscreen, making it easy to navigate. As once you switch to lanscape mode, the screen and image are at 90 degrees to each other, which is rather confusing when you look down to make adjustments.

We suppose the only answer would be to mount the projector on the long side of the handset, though we can see that would make it awkward to use handheld and also make the handset rather strangely shaped.

On the demo model, focus was controlled using the volume rocker, though this is likely to change to a software slider control. It can project an image up to 50in across at around the same distance from the screen.

Image quality was a bit fuzzy admittedly at these sizes, and it needs to be pretty dark too – we saw it demoed in a curtained-off booth. Even on the bright show floor you could create a fairly visible image a foot or so across though on a white surface, far better for showing off photos or a youtube video to friends than the phone’s own 4in display.

Samsung has already come up with some brilliantly clever ideas of how to use the Beam. We saw its overhead projector mode demoed, where the 5-megapixel rear camera is used simultaneously to capture a live feed which is then fed to the projector.

There’s also an alarm clock setting, so you can get the projector to turn on and display ambient scenes of natural beauty onto your celing first thing in the morning.

Other such ideas come to mind quickly. Watching TV in bed late at night on the ceiling is an obvious one, though we doubt the display’s resolution is quite up to eBook reading in this manner.

Apart from the projector the Beam is a fairly typical smartphone by modern standards. It has a 4in, 800×480 TFT display and a 1GHz dual-core processor. There’s a modest 768MB of RAM fitted along with 8GB of internal storage plus a micro SD card slot.

The Samsung Galaxy Beam certainly isn’t for everyone, and we’re a little worried about the eventual price. For now though, no pricig or release date has been announced. However, the fact it will ship with Android 2.3.5 suggests it won’t be too far off. 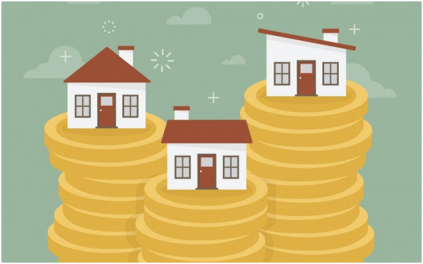 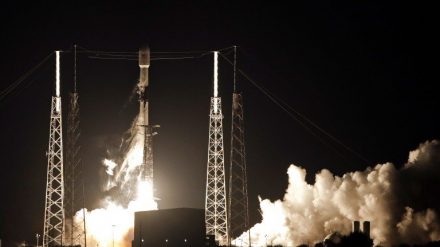 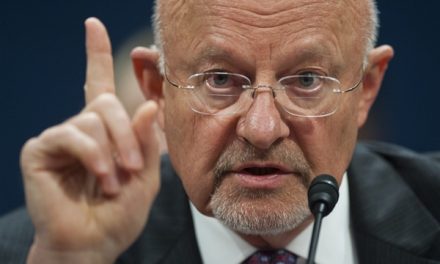