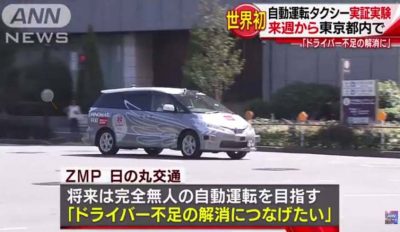 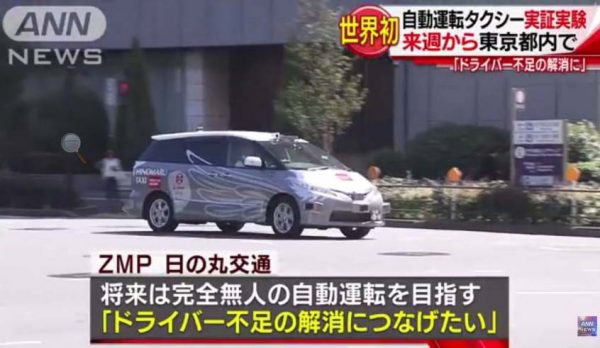 With less than two years until the start of the 2020 Tokyo Summer Olympics all sorts of preparations are currently underway in order to make sure the event goes off without a hitch. Although many of these preparations are to be expected – making sure there’s enough lodging for visitors and upgrading event facilities – others, like one that kicked off on today (Monday) are anything but.

On August 27, the Japanese taxi company Hinomaru and the robotics company ZMP began the world’s first trial of a totally autonomous taxi.

As part of this trial, which will continue until September 8, an autonomous car will chauffeur humans between Tokyo’s Otemachi and Roppongi areas. Passengers who get to travel this 5.3 kilometer stretch will do so at a cost of 1,500 yen (about US$13.50).

A smartphone app is used to make a reservation for the taxi and then open the taxi door by scanning a QR code on the taxi itself. Rather than telling a driver their destination, the passengers input it themselves electronically.

Although there is an actual human in the driver’s seat and a human technician in the passenger’s seat, they are only there for safety reasons. For the most part, it is the car’s software that is doing the steering, braking and accelerating.

The passengers for this trial are selected via a lottery system and the taxi is only doing four round trips a day, so it looks like not many will get to enjoy the experience of watching a taxi driver watch his taxi drive itself.

One participant in the trial said on Monday that aside from a few moments when there were other cars moving in potentially dangerous ways and the driver took brief control, the car drove itself with no assistance from the human driver.

Check out the taxi in action at Nihon Keizai Shinbun in the video below: 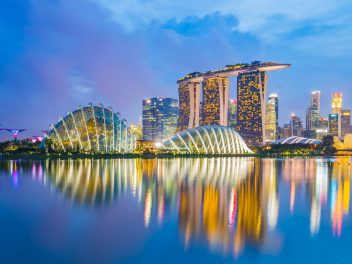 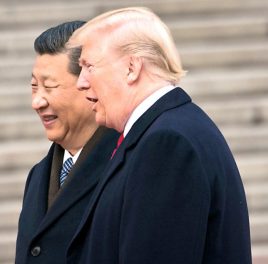 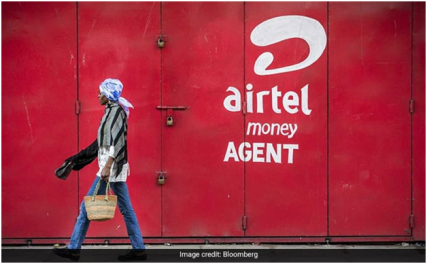