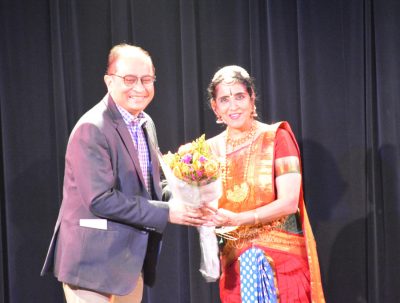 A Dance Review by Subhadra Vardharaj 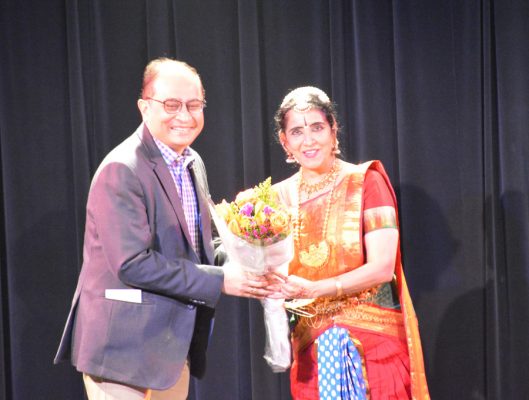 Symphony Space, New York – April 06, 2019 – Most of us live our mundane daily lives, caught in the everyday rituals of life’s never-ending chores. But then, very rarely, there comes along a day, that will truly jolt you to the core, will transport you in time and space to a different dimension, and will make you discover the joy of an exceptional performing art. I experienced one such day in April, at Symphony Space in New York.

I attended a Bharatanatyam dance performance by Bala Devi Chandrashekar, based on research and guidance by scholar Dr TN Ramachandran and historian Dr Kodavayil Balasubramanian.

The production embellishes the link between the magnificent physical form of the Brihadeesvara temple, in the southern Indian city of Thanjavur, and the universal supreme omnipresence of Ishwara through the Devaradiyal’s ordained unique mystique and intrinsic understanding of the esoteric connection of the form to formless. This exquisite production takes the audience on a journey into the life and mind of a Devaradiyal, who as the name means, is “one who has surrendered herself at the feet of the Lord.”

She has dedicated her life to the eternal service of the Lord, and leads the purest of pure lives. The first act begins with Bala in a resplendent white attire, transformed as Devaradiyal, who radiates beauty from head to toe, with tresses like dark clouds and glistening ornaments adorning her hair and forehead. Her face reflects the awe at the spellbinding beauty of the temple edifice, built by Raja Chozhan, and her inner spirit, resonating with the spiritual fervor of that hallowed temple.

And there I was, journeying through time and space, along with Bala, to the era of the great Chozha kings. Bala captures your imagination accentuating the architecture of the temple while weaving a connection between the physical, literary, spiritual and metaphysical significance of each of them.

In the second and third acts, I felt myself further drawn into the spiritual journey, walking alongside the Devaradiyal as she renders her everyday services to the temple. The lyrics and the beauty of Thevaram, surround the audience and immerse us in the aura as experienced by the Devaradiyal, as she perceives the Lord in the form of a lingam – a cosmic image of the Lord with no beginning or end. Bala’s intense research on both the religious and historical aspects of the temple and Saivaite philosophy, accentuates the beauty of the choreography.

The final act is a masterpiece, where Bala as Devaradiyal depicts the realization and comprehension that comes to her, when she fully absorbs the form to formless state of the Lord. Bala’s portrayal of the Devaradiyal’s untarnished celestial love of the Lord, the boon that is hers, nithyasumangali, to be eternally married to the Lord, and the ultimate unification of her individual soul with the supreme energy is breathtaking. As the act ends, I felt jolted back to the present, surprised to find myself standing and clapping, a dissonance, after experiencing a first person account of a different place and time. 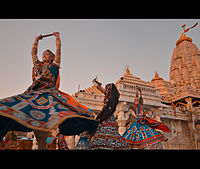