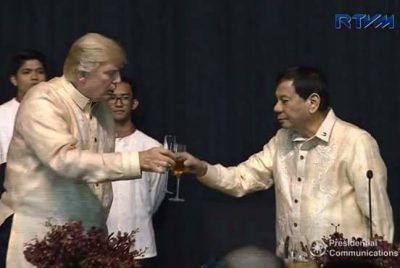 WASHINGTON D.C. – Filipinos’ belief that the United States will defend their country or territory in a military conflict has remained high and steady in recent years, along with Australians, New Zealanders, and South Koreans. The Japanese people’s belief and confidence in such defense has also remained steady in recent years, although the confidence level is not as high as those of residents of the other four countries.

US President Donald Trump with President Rodrigo Duterte in Manila in November 2017. Photo credit RTVM as published in the March 01, 2019 issue of the (Philippine) Daily Tribune 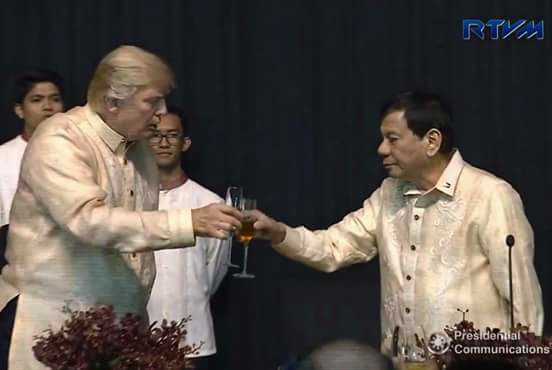 These responses were obtained in polls of representative samples of 1,000 to 3,000 adults aged 15 and older per country in 15 countries by the Gallup organization from April to July 2016 and from February to September 2017. The margins of error are plus or minus 4.5 percentage points at the 95 percent confidence level. A discussion of the results was laid out in an article entitled US Defense Promise Still Credible in Asia-Pacific by Stafford Nichols and Zacc Ritter.

Among the non-allies, only six percent of Pakistani respondents thought in 2016 that the US would defend them should their country be involved in a military conflict with another country, and this increased to only 11 percent in 2017.

The ‘pivot to Asia’ that former President Barack Obama began with the Trans-Pacific Partnership (TPP) in order to counterbalance Chinese influence in that region – with long-term commitments by strengthening bilateral security arrangements and increased multilateral trade – was largely abandoned with Trump’s withdrawal of the United States from that regional agreement. He announced after being sworn into office that he favors bilateral trade and security agreements with individual countries, rather than a multilateral arrangement like TPP.

As a consequence he had several meetings with Japan’s Prime Minister Abe, and in September 2018, a joint announcement indicated the two countries would not impose tariffs on each other but will continue to improve trade relations. So far what has been agreed upon will provide greater benefit to American grain farmers and beef and pork ranchers. Between 2007 and 2017 US agricultural exports to Japan increased from $10.2 billion to $11.9 billion.

This isn’t the case with China which is more complicated. The US has imposed tariffs and more may be forthcoming unless a mutually-favorable deal including the end of theft by China of US intellectual property is the outcome of trade talks between these two largest economies in the world.

Trade negotiations and talks on security arrangements between South Korean President Moon Jae-in and President Trump have gone smoothly, and on 24 September, 2018 the two leaders signed an updated free-trade agreement that aims to reduce the US trade deficit with South Korea by creating new opportunities to export American products particularly in the areas of agriculture, automobiles, and pharmaceuticals.

With the updated trade deal, South Korea would double its purchases of American cars from 25,000 to 50,000 per year, besides buying more pharmaceuticals and food products. Between 2012 and 2017, agricultural exports alone to South Korea increased more than 50 percent from $6.3 billion to $9.8 billion. South Korea is now the sixth largest overall export market of the US, after Canada, Mexico, China, Japan, and Germany.