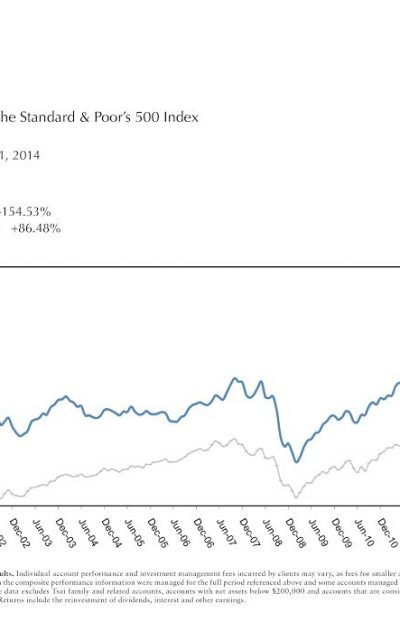 Tsai Passport SMAs are designed to serve a broad range of clients including corporations, foundations, individuals and trusts. The SMA offering was launched by Tsai Capital in January 1998. Through December 31, 2014, its 15-year net return to clients was 154.53 percent, (see chart) compared with a total return of 86.48 percent for the S&P 500 Index.

“This product is for investors who require more than a ‘one size fits all’ strategy,” said Christopher Tsai, president and chief investment officer of Tsai Capital Corporation. “Tsai Passport SMAs offer clients the flexibility to enhance current income, for example, or to avoid investments in certain industries.”

In addition to Tsai Passport SMAs, which have a minimum investment requirement of $250,000, Tsai Capital offers a long / short global equity fund, which is an investment partnership with a highly-focused strategy for qualified investors. For both of these products, the firm seeks long-term investments in high-quality, growth companies that offer significant upside potential and a margin of safety at the time of purchase.

“Over the past 15 years, we have had a very strong track record. While past performance never guarantees future results, in the years to come, we look forward to assisting our clients in building and protecting their wealth,” Tsai stated.

These are some of the bases of Mr. Tsai’s investment philosophy